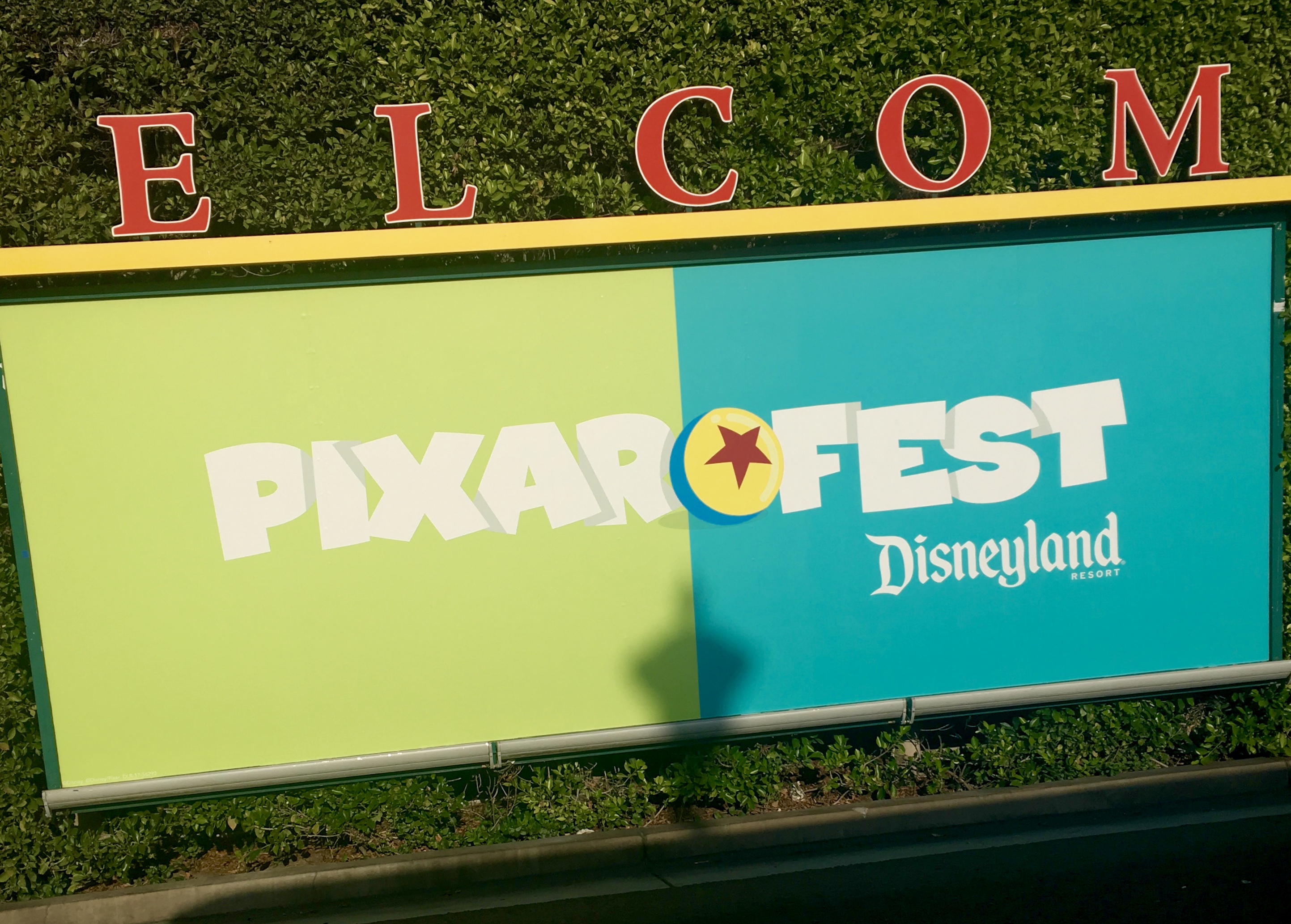 With the Opening of the Pixar Pier this week, we figured this was the perfect time to bring you 7 things to do at Pixar Fest! Happening now until September 3rd. If you only have the chance to get to the parks for a short amount of time, these are the things you don’t want to miss out on!

I know, I know, you’re thinking really? Food first? Yes, because this Pixar themed cake is delicious! And if I wouldn’t gain 100lbs from doing so, I would eat it every single day. This layered cake is spectacular, with 3 different flavors in each layer – Vanilla, Red Velvet and Lemon.

Layered with a smooth raspberry filling and topped with a delicious cream cheese icing, you need to get this. You will be very sad if you don’t. It can be found in Disneyland at The Plaza Inn or in DCA at the Garden Grill or Pacific Wharf Café.

All of the Sweet Pixar Treats

There are literally so many we can’t name them all! From the Dug and Russell Cake pops to the Alien Apple and Mike Wazoswki Rice Crispy Treat, there will be a delicious treat to try every time you visit throughout the festival!

Only certain treats are available during certain times so make sure to CHECK OUT THE SCHEDULE to see when your favorite treat will be in stock. Make sure to grab it before its gone!

The play parade is back but now in Disneyland park! The Parade happens twice daily at 12:30 and 3:30pm. It features some old friends and a couple new – like Joy and Sadness riding in Bing Bong’s Rainbow Spaceship. I especially like the fun upbeat music of this parade. It’s sure to add an extra bounce to your day.

The All-new Pixar Pier and INCREDICOASTER

The Pixar Pier is now open and one of the biggest events happening at the festival! With the all new Incredicoaster set to open make sure to get your fast pass early in the day. This ride will be hotter than baby jack-jack bursting into flames!

The Ferris Wheel is also getting a Pixar themed face lift! With all new cars featuring your favorite pixar characters. The pier will be opening with new rides and attractions centered around your favorite Pixar films like Wall-e, Inside Out and UP!

Ok, here’s the part where I pretend that this didn’t actually happen. “One could even catch themselves getting emotional.” Yes, I was so overwhelmed by the amazing firework spectacular that I cried the first time I saw it. The meaning of friendship and beyond, seeing all the projections of my favorite Pixar film moments, and to top it off my favorite thing in the world – fireworks. I got really emotional and I cried, which I rarely do.

There is so much happening in this show, that I’ll need to include a spoiler alert if I tell you anymore! So go see it, and be wowed, I promise it will not disappoint. My favorite place to watch is right behind the Walt and Mickey statue just in front of the Coke-a-Cola refreshments corner. Or a bit farther back on Main Street near the arcade and ice cream shop. But you can also catch the show at It’s a Small World with Projections on the Clock, or at the Rivers of America.

Head over to the Garden Grill and meet some of your favorite characters! Dug, the Incredibles and Mike and Sully (Or as I like to yell “KITTY”) are all available for photo-ops throughout the day. Also, get a picture with some of your favorite Pixar film posters, like Finding Nemo, and Coco! And don’t forget to stop by the restauarants to get some Pixar themed bites!

You can never have too many photo ops at Disneyland. That’s why if you head over to Disney California Adventure you can catch Pix-car’s Buzz Lightyear and Woody! Because why wouldn’t the cars from Pixar’s Cars dress as their favorite Pixar Movie Characters – besides themselves of course. The line for this photo-op gets long, so make sure you go when it’s a little cooler if you can’t stand the heat.

There’s so much more to do at Pixar Fest! But if you’re short on time try to fit in as many of these as possible!

It’s here everyone! Captain Marvel meet and greet at Disney California Adventure. I am beyond excited for this, we are hitting the […]

Summer is quickly approaching which means it is time to start planning your Disney family vacation!  If you are looking to break […]